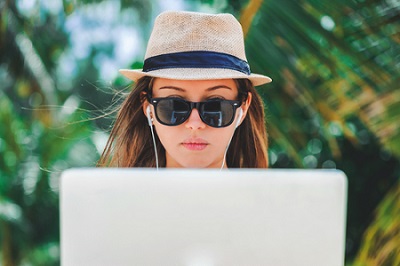 The proliferation of high speed internet globally has inspired tens of thousands of Americans to choose to work remotely from abroad.

Digital Nomads get to explore the world without the financial downside taking time out of their career. Many work as self-employed freelancers, or have established their own business, while others remain employed by a US firm.

All Americans are required to file US taxes though, wherever in the world they live or work, including Digital Nomads. This is because the US taxes based on citizenship rather than on residence.

Filing from abroad is different though. This is because Americans outside the US have to file additional forms to reduce their US tax bill. They may also have to report a foreign registered business, convert income received in foreign (or virtual) currencies into US dollars, report any foreign financial accounts they may have, perhaps claim a tax treaty provision, and ensure that the way they work in as tax efficient a manner as possible. This is why American Digital Nomads most often seek assistance from a US expat tax specialist firm.

In this article we’re going to look at some of the main issues that American Digital Nomads abroad face when filing their US tax return.

The Foreign Earned Income Exclusion is an IRS provision that allows Digital Nomads to reduce their US tax bill.

Most often, American Digital Nomads don’t pay taxes in a foreign country, as they don’t stay long enough in any single foreign country to qualify to pay taxes. If they do however, they may be better off reducing their US tax bill by claiming the Foreign Tax Credit by filing IRS Form 1116.

For most Digital Nomads though, claiming the Foreign Earned Income Exclusion by filing IRS Form 2555 allows them to exclude up to $105,900 (in 2019) of their global earned income from US tax. This often eliminates their US tax bill completely.

“If you’re looking to roam free as a bird, you’re not alone. A recent study by the New York Times found that most industries are embracing remote work.” – Entrepreneur.com

To claim the Foreign Earned Income Exclusion, Digital Nomads have to reside outside the US for 330 days in a 365 day period that is normally the tax year. If they move abroad mid year though, they can claim for the subsequent 365 day period.

To ensure they have enough time to file, American s living abroad get an automatic two month filing extension until June 15th, although if they do owe any US tax an estimated amount is still due on April 15th. They can also further extend the filing deadline to October 15th on request.

Claiming the Foreign Earned Income Exclusion doesn’t mean not paying US social security taxes though, so self employed Digital Nomads, as well as those employed by a US firm, still have to pay.

If they also pay foreign social security taxes, and live in one of the 26 countries that the US has an agreement with, they won’t have to pay both though.

There may be a workaround for self-employed US Digital Nomads if they incorporate in a low or no tax jurisdiction, however not paying US social security may affect future entitlement to social security payments. If it’s only temporary and the Nomad is young though, it may make sense to incorporate. Incorporating abroad also means extra US reporting requirements relating to foreign registered corporations, however it can still be a worthwhile strategy for some.

Some states require former residents to continue filing a state tax return. It often depends on how long a Digital Nomad plans to live abroad for, and what ties they still have in their former state. Different states have different rules, so always check before assuming that you do or don’t.

The IRS has a voluntary amnesty program for Americans living abroad who haven’t been filing because they weren’t aware that they had to.

The program is called the Streamlined Procedure, and it lets international Digital Nomads catch up with their US filing without facing penalties, so long as they do so voluntarily as soon as they become aware that they have to file.