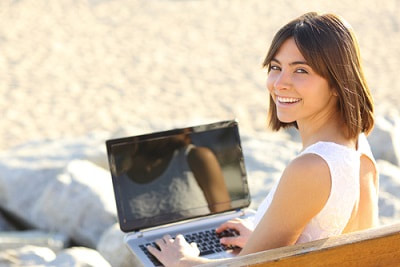 The internet has changed almost every aspect of life, from the way we access information, to the way we shop and interact socially. For many, it has also brought the opportunity to become location independent, or a Digital Nomad, wandering the globe working from anywhere with internet access.

American Digital Nomads find themselves in a unique situation tax-wise, as the US taxes by citizenship rather than by residence.

The first and most important point to remember is that the US taxes on all income wherever in the world it is earned. So if you are working for an Australian company while traveling in South East Asia for example, you would still be liable to pay US income tax on your earnings.

That said, there are differences in the filing requirements and tax liabilities for US residents and non-residents. In particular, if you aren’t resident in the US, you can claim certain reductions or exemptions that aren’t available to US residents.

There are two ways that you can prove that you’re non-resident in the US: the Physical Presence Test, and the Bona Fide Residence Test.

The Physical Presence Test requires you to prove that you are physically present in one or more foreign countries for at least 330 days in a 365 day period which must overlap with the tax year. Days spent travelling between countries do not count.

The Bona Fide Residence Test requires that you prove that you are legally resident in another country, usually by being registered and filing for taxes there.

If you can prove your non-US-residence in one of the above two ways, you’ll be eligible to claim the Foreign Earned Income Exclusion, which allows you to exclude up to around $100 thousand of earned income from US income tax.

If you are a bona fide resident of another country meanwhile, you can claim the Foreign Tax Credit, which lets you exclude a dollar of tax owed for every dollar of income tax that you’ve paid on the same income in another country. This is a good option if you live in a country where the income tax rates are higher than in the US, as any excess credit can be carried over into subsequent years.

The majority of States will release you from income tax obligations so long as you can prove you are no longer resident in the State six months after leaving. Just four – New Mexico, Virginia, South Carolina and California – make the process a bit harder, asking that you prove that you never intend to return to live there before releasing you from your obligations.

Under FATCA legislation (Foreign Asset Tax Compliance Act), in general if you have assets abroad worth over $200 thousand, you’ll probably have to attach form 8938 to your annual return.

A Foreign Bank Account Report (FinCEN form 114) meanwhile must be filed if you have a total of at least $10 thousand in one or multiple bank accounts abroad at any time during the tax year.