Taxes for Expats – IRS Tax Forms for US Expats Explained 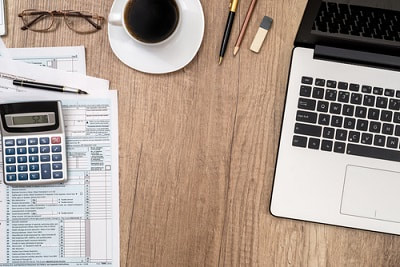 Americans living abroad are still required to file US taxes and declare their worldwide income. They may also have to pay US taxes, regardless whether they are also paying foreign taxes, though most expats claim one or more of the IRS exclusions available to expats that reduce or eliminate their US tax liability.

Expats may also have to report their foreign trusts, businesses, assets, and any financial accounts they have (or have signature authority or control over). So which are the most commonly used forms expats are likely to have to file?

While expats still have to file form 1040, they have longer to file, up until June 15th, while a further extension is available until October 15th upon request (by filing form 2350).

Most expats will be familiar with form 1040 from when they lived in the States.

In particular form 1040, Schedule B, Part III is relevant for expats, as they should indicate here whether they will also need to file an FBAR (see FinCEN form 114, below, for further details).

Form 2555 is used to claim the Foreign Earned Income Exclusion.

The Foreign Earned Income Exclusion allows expats to exclude the first around $100,000 of their income from US tax liability, so long as they can prove that they are living abroad in one of two ways, using either the Bona Fide Residence test, or the Physical Presence Test.

The Bona Fide Residence Test requires expats to prove that they are permanent residents in another country, perhaps using foreign visa, tax or utility bills documentation. The onus is on the expat to provide proof.

The Physical Presence Test meanwhile requires expats to demonstrate that they spent at least 330 days outside the US in the tax year (or in a 365 day period that overlaps with the tax year, if they moved abroad mid year). This is useful for people who live abroad but travel from country to country rather than those with a permanent home overseas.

If you earn a bit more than around $100,000 and you rent your home abroad, you can also claim the Foreign Housing Exclusion on form 2555, which lets you exclude a proportion of your housing expenses from US tax.

“If you are a U.S. citizen or resident alien, the rules for filing income, estate, and gift tax returns and paying estimated tax are generally the same whether you are in the United States or abroad. Your worldwide income is subject to U.S. income tax, regardless of where you reside.”
– The IRS

Expats who earn over around $100,000, or who live in a country where they pay more income tax than they would owe to the US, should consider claiming the Foreign Tax Credit using form 1116.

The Foreign Tax Credit gives a $1 US tax credit for every $1 equivalent of tax already paid in a foreign country. This can be preferable to the Foreign Earned Income Exclusion if you pay more tax abroad, as in this scenario you can claim more tax credits than you owe US tax and keep the excess credits for future use.

FinCEN form 114 is also known as a Foreign Bank Account Report, or FBAR.

FBARs are required if expats have bank or investments accounts abroad (including mutual and pension accounts with a cash balance) worth over $10,000 in total at any time during the tax year.

Qualifying accounts also include accounts that expats have control over even if they’re not in their own name, such as family trusts, or business bank accounts.

FinCEN form 114 is filed online, and as it is filed to FinCEN rather than the IRS, the penalties for not filing are incredibly steep, so it’s worth double checking whether you need to file this form.

Expats with foreign assets (not including ‘tangible’ assets such as property, cars etc.) worth over $200,000 at any time during the tax year are required to file form 8938 to declare them.

Expats with investments and/or small businesses worth over this threshold should ensure that they meet this requirement.

If you weren’t aware that you had to file US taxes as an expat, don’t panic: there’s an IRS amnesty program called the Streamlined Procedure that lets you catch up without facing any penalties. You just have to file your last 3 tax returns, and your last 6 FBARs (if applicable in your circumstances), and self-certify that your previous non-compliance was non-wilful.

Taxes for US expats can be complex, including claiming exclusions (and knowing which are best for you to claim) and reporting any overseas accounts and assets if necessary. If you have any doubts about your circumstances, we strongly recommend that you seek help from a US expat tax specialist.