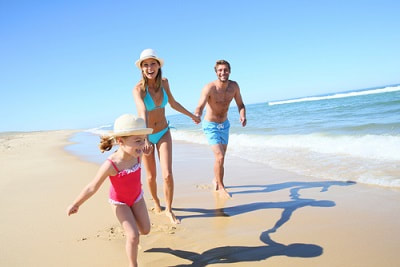 Since the 2017 Tax Cuts and Jobs Act, American Expat parents can potentially take advantage of two US Child Tax Credits, depending on their circumstances: the Child Tax Credit, and the Child and Dependent Care Credit. In this article we outline when and how they can be used, and what conditions need to be fulfilled to claim them, and also have a look at the changes to the Child Tax Credit introduced by President Biden in the 2021 American Rescue Plan stimulus package.

All Americans are required to file a US tax return if they earn over $12,400 (in 2020, or $12,550 in 2021), or just $400 of self-employment income, or just $5 of any income if they’re married but file separately from a foreigner, worldwide. This is because the US taxes based on citizenship rather than based on residence. Many expats also have to report their foreign bank accounts, investments, and businesses.

Even though they still have to file, most expats don’t end up paying any US tax though, as they claim either the Foreign Tax Credit, or the Foreign Earned Income Exclusion, when they file.

Which of these IRS provisions each expat should claim depends on their circumstances, such as their income levels and types, which country they live in, and their residency status there.

The US Child Tax Credit

The Child Tax Credit allows parents, including expats, to deduct $2,000 from their US tax bill for each of their children in years prior to 2021, or $3,000/$3,600 in 2021 (subject to certain conditions that disqualify most expats – more details below).

To qualify, the children (or stepchildren, grandchildren etc) must be 16 years old or younger at the end of the tax year (and live with the person claiming) for at least half of the year, they must be US citizens, and they must have a US social security number.

So an expat with a US tax bill of $7,000 and three qualifying children could reduce their tax bill by $6,000 by claiming the Child Tax Credit.

The Child Tax Credit is also refundable, meaning that if your US tax liability is already zero, a refund payment can be claimed.

Expat parents who claim the Foreign Tax Credit to reduce their US tax liability to zero claim the refundable Child Tax Credit, which gives a refundable credit of $1,400 per child.

Can US Expats Claim the Child Tax Credit and the Foreign Earned Income Exclusion?

If you’re not sure what is the best way to file as an expat, seek professional advice.

The Child and Dependent Care Credit

The Child and Dependent Care Credit allows parents who pay for child care to claim a tax credit of up to $600 per child (i.e. they can reduce their tax bill by this amount). However, it’s not refundable, so it’s only useful to expats in certain circumstance.

In March 2021, President Biden passed the American Rescue Plan stimulus packages. One of the measures in the package was an expanded Child Tax Credit for the 2021 tax year worth $3,000 per child between ages 6 and 17, and $3,600 for children under age 6. The increased amount is available for lower income families (those with a Modified Adjusted Gross Income of up to $75,000 per person, after which the amount received begins to phase out).

However, a condition of receiving the higher amount is that you have to have spent at least half the year resident in the United States, meaning most expats won’t qualify.

This means that expats can still claim a $2,000 credit per dependent child in 2021, or, if you have eliminated your US tax bill by claiming the Foreign Tax Credit, a $1,400 refund per child.

The IRS stipulates that the increased amount and the advance monthly payments are only available for Americans whose main home is in the US for at least half of 2020, which means that unless this condition is scrapped, most expats will receive the usual refundable $1,400 when they file their 2021 tax return in 2022.

Can the Child Tax Credit be claimed retroactively?

The Child Tax Credit can be claimed for up to 3 years after the filing due date, which means for the last 3 years for most expats. This is the case for expats who may have been claiming the Foreign Earned Income Exclusion as they were unaware of the refundable Child Tax Credit, who can file amended returns to claim it, as well as for expats who haven’t been filing from abroad.

Catching up with your US expat taxes

The IRS has global reach, so we recommend that expats who weren’t aware that they are required to file US taxes from abroad consider the Streamlined Procedure, an IRS amnesty program that allows Americans living abroad to catch up on their US tax and FBAR filing without facing any penalties. Furthermore, expats who haven’t been filing may qualify for three rounds of stimulus payments and the Child Tax Credit, which for a family with two eligible children could equate to receiving a $13,000 total IRS refund.