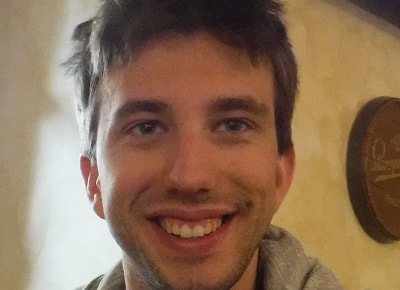 Brandon Fathy has been named as the latest Bright!Tax Global Scholar Award Winner.

Thanks to Bright!Tax’ support, Brandon will be taking up a place at the University of Leicester in the UK to begin a PHD in Archeology in January.

The Bright!Tax Global Scholar Program was set up in 2016 to provide opportunities for exceptional young Americans to study abroad. It is the brainchild of Bright!Tax CEO …

… and founder Greg Dewald, who himself had the opportunity to study abroad as a young man.

The Bright!Tax Global Scholarship is awarded biannually, and Brandon follows in the footsteps of five previous recipients of the Bright!Tax Scholar Award.

Brandon did his undergraduate degree at the University of Leicester. While he was there, he had the good fortune to be involved in the excavation of the skeleton of England’s King Richard III, who disappeared following the Battle of Bosworth in 1485. The discovery ranks among the major archaeological discoveries in the British Isles, and it has shed light on both the man, as King, and the period. For example, Shakespeare portrayed King Richard as a hunchback, and while many believed this characterization to have been propaganda to please the royal family, the archaeological evidence revealed that it was, in fact, true.

Bright!Tax Global Scholarships are awarded based on academic merit, extracurricular activities, financial need, and at the discretion of the Bright!Tax Awards Committee.

In high school, Brandon was valedictorian and achieved a perfect GPA. He was also the captain of his school’s academic decathlon team, which advanced to state competitions and in which Brandon was third highest scorer in Texas. As student council president, Brandon introduced a school-wide recycling program.

“As a US citizen who wants to make as big and positive impact as I can, I’m enormously grateful to the Bright!Tax for awarding me the Global Scholar Award.” – Brandon Fathy

Brandon achieved the highest possible grade in his undergraduate degree, while also finding time to guest lecture in local British high schools on the excavation of King Richard III.

The Bright!Tax Global Scholar Award will provide Brandon with supplementary tuition fees support as he works on his doctorate degree.

Brandon said: “As a US citizen who wants to make as big a positive impact as I can, I’m enormously grateful to Bright!Tax for awarding me the Global Scholarship Award. Completing a degree at a foreign university is a financial challenge. I’ve worked two jobs as a high school teacher and tutor to save for my degree. The contribution this scholarship makes to my career as a researcher is greatly appreciated.”

Bright!Tax is a leading cloud-based provider of tax services to the nine million Americans living overseas.

In 2017 the firm was recognized by multiple awards itself, for excellence and employing innovation to help make the complex process of filing US taxes from abroad smoother and less daunting.

Bright!Tax believes that Americans who venture abroad are the new pioneers, whose intrepid spirit in exploring opportunities far from home is integral to what it means to be American.

Furthermore, they are America’s informal ambassadors around the world, shaping many people’s perceptions of our country.

“Bright!Tax has experienced stellar growth over the last few years serving the American expat community worldwide. We established the Global Scholar Award to help a new generation of young Americans to have the same experience to study overseas that I had many years ago. Brandon is an exceptional young American embarking on an exciting adventure. He has lived abroad before, and, like so many of us, he enjoyed it so much that he’s ready to go back out into the world again. He has a bright future, and with our support I’m sure he’ll achieve every success.”