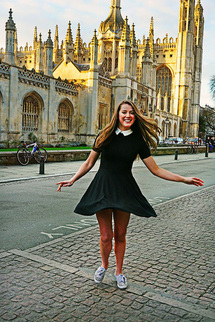 American expats can live incredible lives, and often have incredible stories to tell. New Yorker Caroline Calloway is a mature student studying History of Art at Cambridge, one of the UK’s (and world’s) oldest Universities. Her Instagram posts about her adventures in the bizarre “Harry Potter-esque” world of the university’s antiquated traditions and rituals have gained her a social media following of hundreds of thousands, transatlantic press coverage, and a book deal. The following is an excerpt from ”I feel like I am in Harry Potter: a year in the life of an American studying at Cambridge”, published in The Daily Telegraph.

“I just love everything here, it’s so different and alien to everything I grew up on, I want to share it with everyone. The rules are so funny and bizarre and it’s just incredible to imagine the history that people have been studying here for hundreds and hundreds of years. It’s been a steep learning curve but so much fun. I can’t tell you the amount of times I’ve had to Google etiquette. Not because I want to be British but more because I don’t want to horribly embarrass myself or be rude to the host.“

When she isn’t attending tutorials and lectures, Ms Calloway is writing what she describes as a “new kind of memoir“.

Ms Calloway gives readers a glimpse into the life of students behind the exclusive college walls – drinking on the college lawns, attending garden parties and dancing at May Balls.

And she marvels at events like Trinity College’s “Court Run“, a race where students down copious amounts of port before attempting to run around the square before the grand clock strikes twelve.

Ms Calloway jokes that she came to study in England to avoid the “math“ requirement set on college applications in the States.

But when she isn’t attending lectures in beautiful “castle-like buildings“, Ms Calloway makes sure her social calendar is full to the brim.

“May Week is such an amazing week, everyone was already talking about it when I arrived in October, so I was worried it wouldn’t live up to the hype,“ she said. “But then May Week came and it was fabulous. I had to sell a kidney to pay for all the balls,” she joked, ” but it was totally worth it.“

But her secret favorite thing about Cambridge is the British accent.

“I definitely grew up with the Hollywood tropes of the American girl who meets the dashing Hugh Grant boy. I want to clarify that I am not one of those tragically old-fashioned girls who goes to college only to find a husband. I love my degree, period. But I’m not complaining about all the dashing British accents. I love that everyone sounds so proper and lovely, even when I can’t understand what’s going on around me – there’s no where else I’d rather be.“