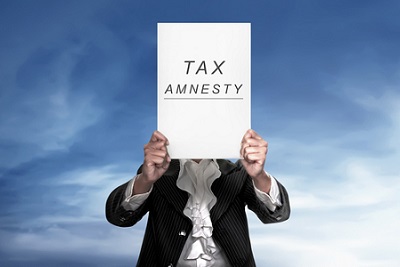 Many Americans living abroad assume that, because they don’t reside in the US, they don’t have to file US taxes.

US law though requires all Americans to file US taxes, regardless of where they reside, and reporting their total global income. They also often have to report any foreign registered businesses, bank accounts, and investments that they may have.

By the time many US expats discover this, they have often missed filing for at least a year.

Fortunately, the IRS has a number of amnesty programs available for Americans living abroad.

Expats who have missed just one year, or sometimes even two years of filing may be able to simply back file. It’s always worth seeking advice from an expat tax specialist though to ensure that you choose the best way to catch up based on your particular circumstances.

In this article we look at some of the different IRS amnesty programs available for Americans living abroad.

The Voluntary Disclosure Practice is available to expats if the IRS hasn’t contacted them yet.

It is most beneficial for expats who believe that the IRS might infer that they have been intentionally avoiding paying or filing US taxes.

The program lets them catch up while avoiding criminal action or penalties, as long as they pay all back taxes, interest, and IRS and FinCEN penalties due.

Most expats who are behind with their US tax filing simply weren’t aware of the requirement to file from abroad, and these expats can catch up using the Streamlined Procedure program. The program requires expats to file their last three federal tax returns and their last six Foreign Bank Account Reports, if required, and to self-certify that their previous non-compliance wasn’t willful avoidance.

“Taxpayers using the Streamlined Foreign Offshore Procedures will be required to certify that the failure to report all income, pay all tax and submit all required information returns, including FBARs was due to non-willful conduct.” – the IRS

Expats can claim the Foreign Earned Income Exclusion or the Foreign Tax Credit for past years, which means most won’t owe any back taxes.

When expats catch up using the Streamlined Procedure program, they won’t face any IRS or FinCEN penalties. However if the IRS later finds evidence of past willful avoidance, they can still be penalized.

Any American with over $10,000 in total in foreign financial accounts, including bank, pension, and investment accounts, and accounts such as business accounts that they may have signatory authority over even if not registered in their name, at any time during a year, has to file an FBAR (Foreign Bank Account Report).

The Delinquent FBAR Submission Procedures lets expats who are behind with their FBAR filing but up to date with their US tax filing catch up without facing penalties.

Expats who have to file one or more amended tax returns late may be able to do so under the Delinquent International Information Return Submission Procedures, so long as they have a reasonable cause for needing to file late.

The Relief Procedures for Certain Former Citizens was launched in 2019 to let so-called Accidental Americans renounce US citizenship without needing a US social security number or tax identification number.

Accidental Americans are people who have the right to US citizenship but have never lived in the US or had a US passport. The program lets them catch up with their US tax filing and renounce US citizenship without paying back taxes and penalties.

There are several criteria to qualify for the program, including having a net worth of less than $2 million, a theoretical US tax liability of less than $25,000 per year for the last 5 years, and that their previous failure to file wasn’t due to willful evasion of their responsibilities.

There are several ways for expats to catch up, often without facing back taxes or fines, and choosing the right way is critical.

We strongly recommend that expats who are behind with their US tax filing seek assistance from a US expat tax specialist to ensure they catch up in the most appropriate and beneficial way possible.