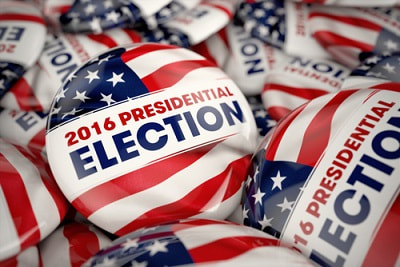 Americans living abroad have been able to vote in absentia since 1975. Expats vote in the State where they last lived, but they do still have to register in good time to receive a ballot.

That these are the most important issues for the estimated 9 million Americans living abroad illustrates the deep impact that complex tax filing requirements including FATCA and FBAR have had on expats’ lives.

So the million dollar question for expats this year is: will either candidate if elected introduce changes to reduce the expat tax and filing burden?

Unfortunately, neither candidate has specifically addressed this question. Overseas Democrats have their own primary, and send delegates to the national convention, so Hilary Clinton did answer expats’ questions (including regarding taxes) during the primaries, however her responses were non-committal (“I hear your concerns” etc.), and she gave no indication that she would actually address them. Donald Trump meanwhile hasn’t addressed the issue at all.

Given the context of a large federal budget deficit, and also an international context of over 100 other countries having signed a FATCA-inspired agreement to share tax and banking details of foreign residents, it’s unlikely that either candidate will repeal the FATCA law.

Donald Trump has spoken about reducing taxes in general however, which expats would presumably benefit from the same way Americans living stateside would, however it’s unlikely that there would be any reduction in expat filing requirements.

“In an attempt to reduce its budget deficit, the U.S. government taxes expatriates on earnings generated in a foreign country — the only industrialized nation to do so.”
– USA Today

Earlier this year, both Nina E. Olson, the National Taxpayer Advocate, and ACA and lobbied for an amendment to FATCA to allow US permanent residents abroad to exclude a checking account in their country of residence from reporting requirement in a so called ‘same country exception’, however there had been no response to this as yet.

So while there may be little impact on expat filing requirements whoever wins, the result will impact the way the world perceives America and Americans, an issue that affects expats every day.

Historically, many expats simply don’t vote though. In 2012, just 15% of eligible overseas voters cast their ballots. This may be because many didn’t register in time (more about this below), or because they thought their vote wouldn’t make any difference.

This second assumption certainly isn’t true though, particularly for expats who last lived in one of the so-called swing states: In the 2000 election, where the outcome came down to just 500 votes in Florida, a very small number of expat votes for Al Gore would have changed destiny.

So if you already have your ballet, don’t forget to vote. Despite living abroad, the result will affect all of us, and expat votes really can make a difference.

1. Every year, you send in a completed Federal Post Card Application (FPCA) to the local election officials in the State where you last lived.

They confirm your eligibility to vote, and put your name on a list to receive absentee ballots for any elections held that calendar year.

They send you a blank absentee ballot electronically or by mail.

2(a). You complete the ballot and send it back so it arrives before your state’s ballot return deadline.

2(b). Or, if you haven’t received your blank ballot 30 days before an election, don’t wait any longer; use the emergency Federal Write-in Absentee Ballot to vote.

Lastly, if you haven’t registered by now, unfortunately it’s too late – don’t try to vote at your local Embassy or Consulate, as they won’t be able to help.