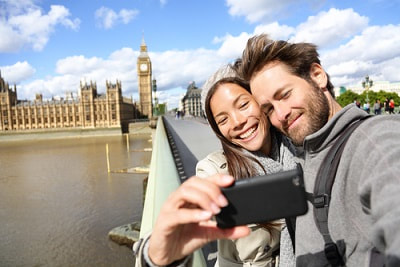 Before last year’s presidential election, it was widely reported that the number of Google searches about moving abroad had skyrocketed, caused by fear on both sides of the political debate of the opposition candidate winning. To an extent this happens before every election, although the phenomenon may have been exaggerated this time. In fact, while the number of Americans choosing to live abroad is increasing each year, the decision to become an expat is more often motivated by positive factors rather than fear.

For example, many Americans move abroad to further their careers, and US expats believe that moving abroad typically results in a 6% increase in income.

However, according to the survey, the true benefit of moving abroad for Americans is a better quality of life. 61% of US expats asked responded that their work/life balance had improved, while 50% said they were happier since they moved, and 45% said that their physical health had improve since they left the States.

These advantages are magnified for Americans who choose to retire abroad, the biggest group of Americans who leave the US each year.

In particular, Americans who retire abroad find that their quality in life is better because they typically choose to move to countries where their retirement income goes further, and where there is often cheap or free good quality health care.

All Americans who move abroad are still required to file US taxes reporting their worldwide income though.

“If you are an American, you are probably grateful for your citizenship and to be living in the U.S. But being an American is also a big advantage when living in many places abroad. ” – The Street

The US is almost unique in this respect, taxing based on citizenship rather than on physical residence.

This often leaves US expats subject to filing taxes both to Uncle Sam and in the country where they’ve moved to.

Thankfully there are several IRS exemptions for expats that mean that although expats still have to file a US tax return, they often don’t end up owing any US taxes.

The most commonly utilized expat exemptions are the Foreign Earned Income Exclusion, which allows expats who can prove that their tax home is abroad to exempt the first around $100,000 of their earned income from US taxes, and the Foreign Tax Credit, which offers a $1 US tax credit for every dollar equivalent of tax paid to another country.

There are also further US tax reporting requirements for expats, including FBAR filing for Americans who have over $10,000 in foreign bank or investment accounts at any time during the tax year.

Penalties for not filing US taxes as an expat are steep, and unfortunately in today’s interconnected world the IRS has access to foreign bank and tax information, and so knows who should be filing, so it’s important that expats don’t neglect their US (and host country) filing requirements while also enjoying the benefits of living abroad.

Americans who already live abroad but need to catch up with their US tax filing can do so without facing penalties meanwhile using the IRS Streamlined Procedure amnesty program.