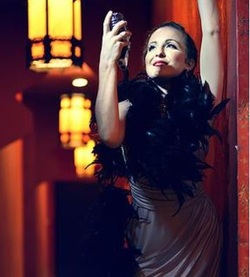 American expats can live incredible lives, and often have incredible stories to tell. Kristen Evelyn Rossi is a jazz singer on a mission to spread the Golden Age of Broadway / Jazz throughout Asia. The following is an excerpt from ‘Falling in Love at the Metropole Hanoi’ in Global Living Magazine.

Born on Long Island, New York, Kristen Rossi is currently living the American expat life in Bangkok, Thailand, where she is an active member of the performing arts scene. She has appeared in numerous stage performances, in Thai and international films, on television and commercial sets and even behind the doors of many voice-over studios. On March 31st, she concluded a four-month stint as the jazz ‘diva’ at the landmark Sofitel Legend Metropole Hanoi.

It was a quiet night in early March and I was halfway through my set in the Le Club bar when a middle-aged man parted company from a woman at one of the cocktail tables. He came up close as I finished a number by Edith Piaf and he waved for me to listen to a secret. “I can’t help falling in love with you,” he said.

My eyes jumped to the woman at his table, who had obviously been his companion.

“Can you sing that song?” he asked. For a moment, I wondered if anyone had caught the surprise in my eyes. I guessed not, and I knew the song. I sang it for this man, and this woman, who were married 31 years ago this night, and who’d danced to this song at their wedding all those years ago. For the last chorus, he came to the stage and sang with me, for his wife. Tears were coming down their cheeks, and mine, too.

This is what it’s been like to sing at the Sofitel Legend Metropole Hanoi for the past three months, six nights a week from 8:45pm till past midnight. There was the night a party of Russians requested “My Way”, and then moved all the tables so they could dance. There was Christmas when I shared the joy of the holiday season with dozens of families. On New Year’s Eve hundreds of people gathered around the courtyard pool, and we counted down the final seconds together. And then there was one day recently when I noticed all kinds of security in the hotel.

“Is it for me?” I asked the food and beverage manager. “Yes,” he told me. But when I stood at the elevator, and former British Prime Minister Tony Blair rushed by with his detail, I understood that what Madonna needs when she sings is not necessarily what I need when I sing. Not yet, anyway!

In May Kristin begins a residency at the new Ritz Carlton Hotel in Macau. For more information on Kristen, visit www.kristenevelynrossi.com.