US Election 2016 – where do the candidates stand on FATCA and expat taxes? 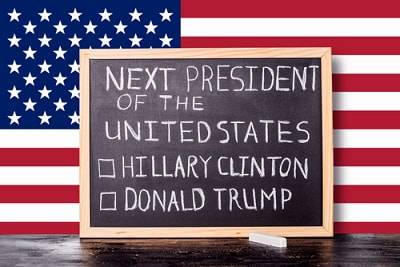 With the election now less than six months away, the shortlist for the 45th President is down to just three – Bernie Sanders, Hilary Clinton, and Donald Trump. Most people agree that it’s an unusual field, to say the least.

It’s been said that that the number of Americans living abroad (estimates range from seven and a half to nine million) would make expats between the 11th and 13th largest State by population.

To put it another way, expats make up around two and a half percent of Americans. As such, we should rightly expect the candidates to consider their concerns. In particular, FATCA and taxes are an important and vexing issue for many expats.

So what do we know so far about the candidates’ attitudes and intentions with regard to expats and taxes?

While it’s unlikely that he’ll end up as president, his strong nationwide support may influence Hilary Clinton’s policy thinking as she tries to reunite the party.

Addressing questions posed by Democrats Living Abroad in February, Mr Sanders was the most sympathetic to the difficulties, inconvenience, costs and stress many Americans are experiencing due to FATCA and FBAR reporting requirements. (So sympathetic in fact that it makes you wonder whether he was simply saying what he thought his audience wanted to hear). In any case, in summary:

– He would like to raise the $10,000 FBAR reporting threshold significantly, as it hasn’t changed since the 1970s.

– He supports the establishment of a Commission on Americans Abroad to examine the impact of federal financial reporting requirements, the ability to vote in US elections, and access to federal programs like Social Security and Medicare for Americans living abroad.

– He said that changing the US taxation system from citizenship-based to residence-based (in line with every other developed nation) deserves serious consideration.

If Mr Sanders were elected president and enacted the three policies above, it would ease the filing requirements considerably for Americans living abroad. These are of course two rather big ‘ifs’. Those expats with income originating in the US though would most likely pay much higher taxes on it under President Bernie, and so despite less reporting, they would feel another sort of Bern.

As might be expected, the most experienced and polished political mover and shaker in the 2016 field’s responses to the same questions were a little (read a lot) less clear.

Regarding the impact FATCA is having on many American expats day to day lives, Mrs Clinton ‘hears us loud and clear’, ‘shares our concerns’, and is ‘committed to working with Americans living abroad and members of Congress to find the right solutions’. Me neither.

Regarding changing to a residence-based taxation system, Mrs Clinton believes ‘we need a broad discussion about reforming our tax code to cut taxes for hard-working, middle class American families living both here and abroad, and to ask the wealthiest Americans to pay their fair share’. Hmm.

And regarding FBAR reform: ‘As president, I will work with Americans living abroad and members of Congress to examine filing requirements with the aim of avoiding redundancies and minimizing unnecessary paperwork and confusion. Any reforms would also need to be scrutinized to avoid weakening government capacity for monitoring illegal activity or tax avoidance facilitated by holding foreign bank accounts’

It’s beginning to make sense why Bernie and the Donald have come so far so fast.

In summary, expect little to no change.

Donald Trump hasn’t specifically addressed expat tax questions, but he has spoken in detail about his plans for general tax reform.

He has criticised the size and complexity of the US tax code, which a century ago was 27 pages long but is now 75,000. He has also stated that if elected he would reduce income tax rates significantly (with none for individuals earning less than $25,000, or married couples earning $50,000, and with the highest rate reduced to 25%), as well as corporation taxes. To pay for this he would close loopholes that reduce tax for big businesses.

So while there’s no indication at this stage that Mr Trump would reduce the filing burden for expats, any taxes owed would most likely be reduced compared to the other candidates.

Another concern for expats with a Trump presidency may be that his gung-ho, non-PC attitude could cause antagonism towards Americans living abroad in other countries, as many expats experienced during the George W Bush presidency.

If Trump does win, the numbers of Americans living abroad are forecast to be boosted by people who don’t like him leaving though, so their empathy with potential foreign antagonists may go some way towards alleviating the problem.