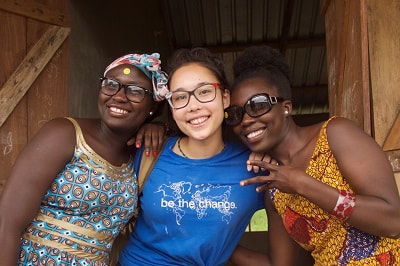 Aina Swartz has fought off competition from over 380 other applicants to win the latest Bright!Tax Global Scholar Award.

Though she was a come from behind entrant, Aina impressed the Bright!Tax Awards Committee with her passion for experiencing life outside the US, and her perceptive observations about what it means being American in the wider world.

Aina spent much of her childhood abroad, in Thailand and then Australia, but since returning to the States she has continued to travel, having spent a semester in Sweden, which she organized herself, including learning Swedish and working with her American school to catch up on the schoolwork she missed while she was abroad. She also arranged to spend a summer holiday volunteering in Ghana, helping to build a school.

Over and above her significant travels, Aina has an excellent academic record, and she has won a place to study History and International Relations at London’s King College University.

Of her time in Sweden, Aina says, “ I found myself explaining and defending American customs to my curious Swedish classmates. I felt proud to share my culture with those who were interested, and even prouder to defend it. Despite being presented with a multitude of stereotypes, I tried to explain that most of all, to me being American meant seeing everyone as individuals despite their heritage, religion, and political affiliation. Even though we may not always succeed in this, I believe that this is the core tenet of Americanism.”

Aina continues: “That is not to say that “American” is the only label I wear. I am just as proud of my American citizenship as I am of my global citizenship, because, at the end of the day, we are all live together on the the same, small planet.”

Scholarships are awarded based on academic merit, extracurricular activities, financial need, and at the discretion of the Bright!Tax Awards Committee.

“That is not to say that ‘American’ is the only label I wear. I am just as proud of my American citizenship as I am of my global citizenship, because, at the end of the day, we are all live together on the the same, small planet.”

“The Bright!Tax Global Scholar Initiative is a personal passion of mine, inspired by an opportunity I had to study abroad that ultimately led to my living abroad and discovering the wider world, as a whole, realizing that, despite our individual challenges, we are all remarkably the same.”

He continues: “Aina is an impressive young woman with a passion for experiencing life abroad and remarkable drive and intelligence. We are sure she will go on to achieve great things, and we are proud to play our part in her journey.”