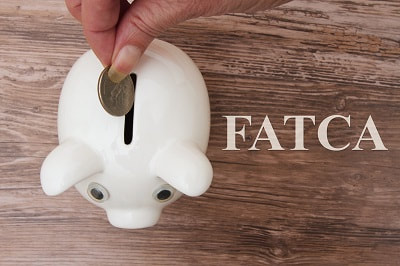 The Foreign Account Tax Compliance Act (FATCA) was signed into law in 2010 with the aim of cracking down on tax evasion to increase tax revenue following the financial crisis.

FATCA requires expats with financial expats with a value over $200,000 per person (so $400,000 for married couples filing jointly) at any time during the year to report them to the IRS by filing form 8938 when they file their federal tax return.

Qualifying assets include all non-physical assets, such as stocks, bonds, savings, pensions with a cash balance, and the value of any businesses that expats may own (or part own).

Tangible, physical assets such as property (owned in the expat’s name), jewelry, art, and cars on the other hand don’t qualify for FATCA reporting on form 8938.

The second aspect of FATCA that affects expats is that it requires foreign banks to report their American account holders’ account details to the IRS each year, including contact and balance information.

FATCA achieves this by levying a steep tax on all foreign financial firms that aren’t complying when they trade in US markets. It has proven an effective strategy, as nearly all (around 300,000) foreign banks and other financial firms are now providing the IRS with their American account holders’ details.

Many expats only learn about this if they receive a letter from a foreign bank or investment firm asking them to confirm that they are fully up to date with their US tax filing.

“FATCA’s heart and soul comes from a vast array of agreements between America and foreign countries that implement this global financial disclosure law. It is a uniquely American law, yet FATCA now spans the globe with a network of reporting that is unparalleled in the world.” – Forbes

The idea of foreign banks sharing private information with Uncle Sam strikes many expats as a breech of privacy, however this is the interconnected world that we now live in. Most foreign governments have also signed tax information sharing agreements with the US, so that the IRS can access foreign tax filing information too.

This affects US expats because, although filing from abroad has been a requirement for Americans since the nineteenth century, now for the first time the IRS is able to enforce it, through having access to expats’ international banking and tax details thanks to FATCA.

In particular, the IRS can cross-reference this information with tax returns expats have filed (or see if they haven’t filed them), as well as information provided on FBARs.

FBARs, or Foreign Bank Account Reports, should be filed by expats who have just $10,000 in total in foreign banks or investment firms at any time during a tax year. Penalties for not filing FBARs are steep, starting at $10,000 per year, so expats are strongly advised not to neglect this filing requirement alongside their annual federal tax return, as FATCA has enabled global FBAR enforcement too.

How can expats catch up with their US tax filing?

Expats are by now no doubt appreciating the profound affect that FATCA has had in terms of allowing the IRS to know which expats are and aren’t filing and reporting their worldwide income and assets.

Many hoped that the Trump Tax Reform Bill would address the issue of expats having to file US taxes, but ultimately it didn’t.

The good news is that there are ways for expats who are behind with their US tax filing to catch up without facing penalties (so long as the IRS hasn’t contacted them yet).

Expats who weren’t previously aware that they should be filing US taxes from abroad who are just one or two years behind can simply back-file. Expats who are three or more years behind can catch up using an IRS amnesty program called the Streamlined Procedure, which also allows them to claim the IRS exemptions such as the Foreign Earned Income Exclusion and the Foreign tax Credit that allow them to avoid double taxation.

To catch up using the Streamlined Procedure, expats must file their last 3 tax returns, their last 6 FBARS (as appropriate), and self-certify that their previous non-compliance was non-willful, which is to say that they weren’t willfully avoiding filing and paying US taxes.