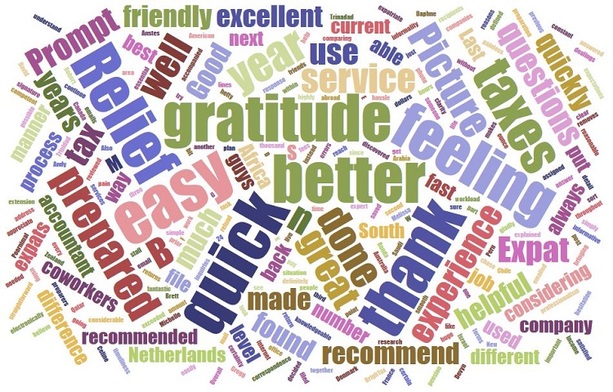 A lot has been written in the media about the effects that FATCA and FBAR requirements and the necessity of filing US taxes have had on expats, ranging from bewilderment and frustration at the extra paperwork and perceived government overreach, to individuals being denied opening or keeping local bank accounts, and individuals being unable to obtain mortgages due to their US citizenship.

We recently carried out an exercise to better understand our clients’ attitudes towards their tax obligations before and after the filing process that yielded fascinating results. I’m not normally a fan of word clouds, however in this case they illustrate the point beautifully. 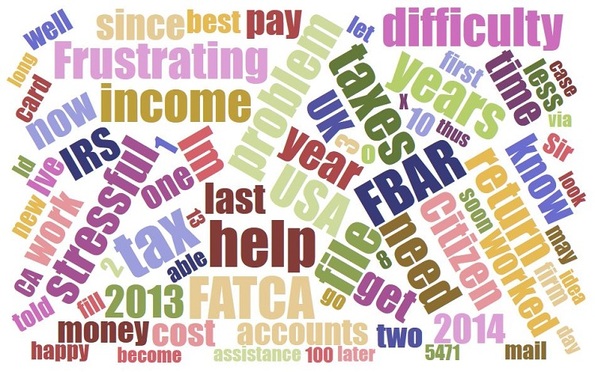 Here you can see how our expat clients feel about their tax returns before filing! It was created using both our clients’ inquiry messages and responses to a questionnaire. It tells a fascinating story of the frustration that many expats feel, and it’s quite an indictment of how FATCA and FBAR obligations and a heavy handed approach to penalizing non-compliance has caused a great deal of anxiety for the millions of Americans living abroad.

Now for the good news!

This second word cloud was created from our clients’ post-filing testimonials again along with responses to our questionnaire. It paints a rather different picture, to say the least. ​

It’s fair to say that everyone, expat or not, feels some trepidation and resentment towards their US tax filing obligation and the IRS before filing, and a sense of relief afterwards, however for expats these emotions are magnified significantly by the additional burden that the government is placing on them and the feeling of being targeted in a heavy handed and overly intrusive manner.

Also, the manner in which you go about filing your return also makes a significant difference with regard to the amount of trepidation and resentment beforehand and particularly the amount of relief one feels afterwards. Attempting to go it alone or avoiding it entirely are probably the most stressful strategies, while the least stressful (and happiest afterwards!) is working with an expat tax specialist such as Bright Tax.