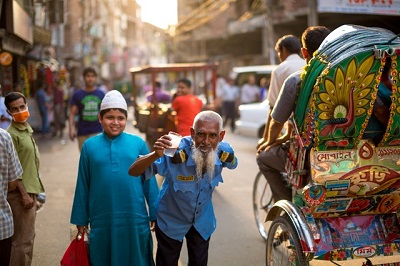 It has been estimated that there are several thousand Americans living in Bangladesh.

Living in Bangladesh is an wonderful experience for a number of reasons, including the friendly locals, the exotic culture, and the quality of life. As an American expatriate living in Bangladesh though, what exactly do you need to know regarding filing US expat (and Bangladeshi) taxes?

All US citizens and green card holders who earn a minimum of around $12,000 (or just $400 for self-employed individuals) anywhere in the world are required to file a US federal tax return, regardless of where in the world they live or their income is generated.

The good news is that there are various exclusions and credits available to reduce their US tax bill.

Expats who earn over around US$12,000 (or just $400 of self-employment income), wherever the income is sourced, have to file IRS form 1040. While any US taxes due are still due by April 15th, expats get an automatic filing extension until June 15th, which can be extended further on request until October 15th.

If you pay income tax in Bangladesh, there are several provisions that allow you to pay less (or no) US income tax on the same income to the IRS.

“One of the greenest countries in South Asia, Bangladesh is a space of winding rivers and mangrove forests ‘ a real find for those looking for a destination off the beaten track.” – Expat.com

The main provision is the Foreign Earned Income Exclusion, claimed on Form 2555, which lets you exclude the first around US$105,000 of foreign earned income from US tax if you can prove that you are a Bangladeshi resident.

Alternatively, the Foreign Tax Credit, claimed on Form 1116, gives you a $1 tax credit for every dollar of tax you’ve paid in Bangladesh. These exemptions can both be claimed if necessary, although not applied to the same income. Remember though that even if you don’t owe any tax to the IRS, if your income is over around US$12,000 (or $400 if you’re self-employed, or just $5 if you’re married but filing separately to a foreigner), you still have to file a federal return.

There is a US-Bangladesh Tax Treaty, however it doesn’t prevent expats from having to file US taxes. Some expats may be able to claim a provision in the treaty though on specific types of income, such as dividends and royalties. If also contains a clause allowing the US and Bangladeshi governments to share taxpayer information, and Bangladeshi banks pass on US account holders’ account info to the IRS too, so it’s not worth not filing or omitting anything on your return or FBAR.

If you’re a US citizen, green card holder, or US/Bangladeshi dual citizen, and you have been living in Bangladesh but you didn’t know you had to file a US tax return, don’t worry: there’s a program called the IRS Streamlined Procedure that allows you to catch up on your US filing without paying any penalties. Don’t delay though, as the program is only available before the IRS contacts you.

Bangladeshi taxes – what you need to know

Bangladeshi residents are taxed on their worldwide income on scale from 10% to 30%. There’s an additional Solidarity Tax for higher earners ranging from 2.5% to 5%. Non-residents are only taxed on Bangladeshi sourced income.

Foreigners living in Bangladesh are considered a resident for tax purposes if they spend at least 182 days in Bangladesh in a tax year, or 90 days if they have spend a total of 365 days in the country during the preceding 4 tax years.

We strongly recommend that if you have any questions or doubts about your tax situation as an American living in Bangladesh that you contact a US expat tax specialist.