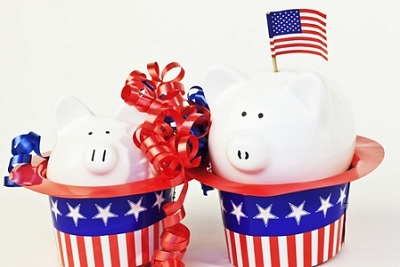 The 2020 US Presidential Election has been overshadowed by the Coronavirus Pandemic this year, with campaigning limited compared to normal, so far at least.

Taxes form an important aspect of both the Republican and Democratic party policy platforms. This year, the Democrats’ tax plans are relatively radical. In this article we look at what changes may be enacted should either party win the 2020 presidential race, and what any proposed changes would mean for expats.

Since the last election, largely due to Bernie Sanders’ popularity and influence, the Democrats have swung further to the left. Sanders and Biden in fact sat down last month to work together on policy ideas, resulting in the party pledging to raise taxes and spend the additional revenue on social programs.

For example, Joe Biden has proposed raising the highest rate of income tax from 37% to 39.6%. Capital gains taxation will also change, from a flat 20%, to instead be taxed at ordinary income tax rates. The main corporation tax rate meanwhile will rise from 21% to 28%.

Many of these changes won’t affect the majority of expats substantially, given that many expats pay foreign taxes in their country of residence at higher rates than the US rates, and then claim the Foreign Tax Credit when they file their US tax return.

Alternatively, many expats claim the Foreign Earned Income Exclusion, allowing them to exclude their earned income from US tax. This means most expats don’t end up owing the US any tax.

One tax change that will affect many expats though is to remove the deduction for expats with a foreign registered corporation that is a subsidiary of a US firm, which currently allows them to pay tax on only half of the profits. This change will effectively double the GILTI tax rate for these expats from 10.5% to 21%.

“Outside of changes in how capital gains taxes are counted as income, Biden’s economic plan is promoting an increase to the corporate rate from 21% to 28% – a 33% hike.” – Forbes

GILTI (Global Intangible Low Tax Income) was introduced as part of the 2017 Tax Reform to ensure foreign-registered, American-owned corporations paid US tax on their profits. Aimed at large multinationals, it has also impacted hundreds of thousands of ordinary US expats with small businesses abroad. The proposed change seems like another example of expats being ignored.

Monte Silver is a US tax attorney and small business owner based in Israel who is currently challenging the way GILTI was formulated and its effect on expat small business owners in US courts. If his suit is successful, a GILTI exemption may be introduced for small businesses (those with revenue under $25m), which would prevent the majority of expats from paying GILTI at all.

Republican tax plans for after the election haven’t been announced in detail yet. No changes to income tax, corporation tax, or GILTI are expected to be announced, however President Trump has announced that he would like to reduce taxes for low and middle income earners. He hasn’t announced any details about what form this might take yet, though.

The only concrete announcement that he has made so far has been that he will reduce capital gains tax, in contrast to the Democratic plan to increase it.

American expats are required to file US taxes the same as Americans residing in the US. Expats also have to report their foreign registered bank accounts, investments, and business interests.

After filing and claiming the Foreign Tax Credit or the Foreign Earned Income Exclusion, most expats don’t owe any US income tax, so changes to income tax rates won’t affect many expats. The proposed Democratic changes to capital gains tax and GILTI on the other hand will affect those expats who have foreign investments or businesses.

That said, for the Democrats to enact their proposed changes, they will need to win not just the presidency but gain a majority in the Senate too, while also retaining the House of Representatives. Even if this transpires, they still might find it hard to increase corporation taxes in the aftermath of the Coronavirus Pandemic, with millions of businesses struggling to stay afloat.

We will update this article as more information about Democrat and Republican tax plans becomes available.

Expats who are behind with their US tax filing, or who have any questions regarding filing US taxes from abroad, should seek advice from a US expat tax specialist.