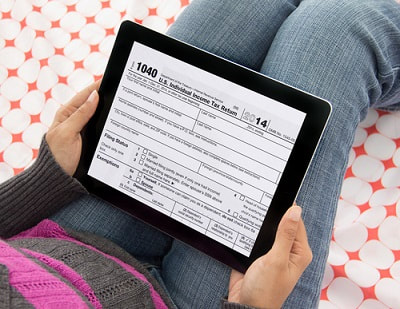 When campaigning, Donald Trump promised not just to lower taxes, but also to simplify the tax filing process.

Last week, the IRS released the draft of a new form 1040 for consultation over the summer, with the final version due to be confirmed in the Autumn.

In this article we look at what the changes and the new IRS form 1040 mean for expats.

New form 1040 is much smaller than the old version, being a double-sided half a page, rather than two whole pages.

There are now 23 lines, down from 79, so the new form 1040 leaves out many income types that fewer tax payers use, such as for alimony, capital gains, and rental real estate. Since the Tax Reform increased the Standard Deduction and abolished the personal exemptions deductions, the fields to report these have also been removed.

The new form 1040 will replace the old form 1040 well as 1040A and 1040EZ, which were previously used by taxpayers with simpler circumstances, starting in January 2019.

The new form however comes with six additional, supplementary forms, called schedules 1-6, which are in fact where the majority of the lines from the previous form 1040 have been moved to.

“What they have essentially done is rearranged the lines, using a lot of additional schedules,” according do Joe Rosenberg, a senior research associate at the Tax Policy Center, as reported by CNN.

What difference will it make for expats?

“Though the form is now “postcard-sized,” filers will still need to pick through additional paperwork — known as schedules — in order to calculate their tax breaks, including the deductions for educator expenses and your health savings account contributions.” – CNBC

US tax filing for expats is typically more complex than for Americans living stateside, as expats also have to claim exemptions such as the Foreign Tax Credit and the Foreign Earned Income Exclusion that prevent most expats from having to pay US taxes.

As such, due to the extra complexity, most expats choose to use an expat specialist tax preparer who will still need them to provide the same information as before, and it will then be the tax preparer’s responsibility to transfer the information to the new format of new form 1040.

As such, only very few expats, those with the most simple circumstances, will be affected by the change.

For the first year at least, even they most probably won’t save time, as rather than referring to their last year’s return, they will have to work out from scratch in which fields to enter their information into the new form.

What should US expats do now?

Most expats, as they employ an expat specialist tax preparer, won’t need to do anything differently next year, as their tax preparer will be responsible for inputting their information into the correct new lines and fields on new form 1040.

Expats who are behind with their US tax filing should catch up at their earliest opportunity to avoid penalties however, which they can achieve by using the Streamlined Procedure IRS amnesty program.