State Taxes for US Expats – What You Need to Know 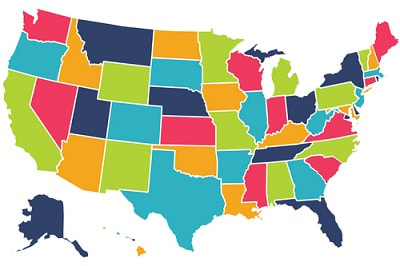 Moving abroad to a foreign country is the adventure of a lifetime, but in the midst of all the excitement and change it’s important not to forget about US taxes.

All US citizens and green card holders have to file a federal income tax return declaring their worldwide income wherever in the world they live. Expats may also have to file and pay taxes in the foreign country where they reside.

But what about state tax return filing for US expats?

Whether expats have to file state taxes or not depends on both their circumstances and the rules in the state where they last lived before moving abroad.

Most states continue taxing former residents on income earned in that state, which may include local investments, rented property, or income earned while someone is physically present in the state, even if just visiting.

That said, most states will release expats from state income tax filing responsibility if they don’t have income sourced in the state, they don’t retain significant ties in the state, and of they can satisfactorily prove that they no longer reside in the state.

Some of the main factors relating to expats’ circumstances that mean they may still have to file state taxes while living in a foreign country are as follows:

While each state has slightly different rules, they can be divided into 3 main groups:

States with no income taxes

Wyoming, Washington, Texas, South Dakota, Nevada, Florida and Alaska do not collect state income tax from their residents, and neither, by extension, from expats who last lived in those states. As such you if you’re a resident in one of these seven states before you moved abroad, you won’t have to file a state tax return as an expat or prove that you’ve moved.

“Among the 41 states that tax income, North Dakota has the lowest maximum rate at 2.9%. California has the highest top tax rate, topping out at 13.3%, but isn’t the only one with a double-digit maximum.”- Business Insider

Tennessee and New Hampshire meanwhile only collect taxes on interest and dividends, which makes life similarly straightforward for most former residents of those states.

New Mexico, Virginia, South Carolina and California make life relatively difficult for expat former residents, asking them to either prove that they will never return to live there, or keep paying state taxes.

If you are moving abroad from one of these four states and you are a relatively high earner, it may be in your best interest to change residency to another state before you move abroad, as although it is a hassle, this could potentially save you thousands of dollars over subsequent years.

The other 37 states are generally fairly happy to let you stop filing and paying taxes as long as you haven’t retained significant ties or a permanent abode in the state, don’t have income sourced in the state, and can prove your residence elsewhere six months after your move.

Some expats who live particularly in the strictest states for state income taxes consider moving to a more tax advantageous state before moving abroad.

This can be a beneficial and successful strategy, depending on expats’ circumstances. For example, an American living in California with investments in the US who moved to Florida could successfully avoid paying state income taxes after they had moved abroad.

For most people though, ensuring that they have no significant ties in the state, including financial accounts and drivers license or other registrations, will be enough.

Expats can claim either the Foreign Earned Income Exclusion or the Foreign Tax Credit by filing the relevant forms when they file their federal taxes to reduce their US federal tax bill and avoid double taxation.

The Foreign Earned Income Exclusion lets expats exclude their earned income while they live abroad from US tax (up to around $110,000 a year), while the Foreign Tax Credit provides US tax credits to offset foreign income taxes paid abroad.

Unfortunately, federal tax filing rules are entirely separate from those for state tax filing, and these IRS provisions can’t always be applied to state tax liability – the ability to apply the Foreign Earned Income Exclusion or the Foreign Tax Credit to state taxes varies by state.

This does unfortunately mean that some expats who still have state tax filing responsibilities while living in a foreign country may experience double taxation, paying both state taxes and foreign taxes on their income without the ability to claim tax credits.

What about tax treaties?

The US has international tax treaties with over 60 other countries, however they don’t prevent expats from having to file US federal or state tax returns. The provisions contained in them in fact don’t affect state tax return filing for expats at all.

Does registering to vote mean having to pay state taxes?

Americans living abroad have the right to vote in local and federal elections, and should register at the property where they last lived in the US.

Registering to vote doesn’t create a liability to pay state income taxes though, as the two systems are entirely separate – voter registration is registered locally rather than at state level.

Every expat’s situation is different. Their reasons for moving abroad, their present and future financial circumstances when they move, their income types and sources, which country they move to, how long they’re moving abroad for, and the state where they last lived in the US, all affect whether expats are liable to file state taxes from abroad or not.

Two essential final pieces of advice: firstly, check the rules in the state where you last lived, ideally before you move abroad, but otherwise as soon as possible. Checking before moving abroad of course gives you the best possible chance of ensuring that you can minimize having to file state taxes as an expat.

Secondly, seek advice. Filing US taxes from abroad, both federal and state taxes, is more complex than filing in the states. There are additional forms to file, additional filing and reporting requirements, and often foreign currencies to convert, too, so it’s almost always beneficial to seek assistance from a US expat tax specialist.

If you’re behind with your US tax filing from abroad and the IRS hasn’t contacted you about it yet, ask an expat tax professional about the Streamlined Procedure amnesty program at the earliest opportunity.