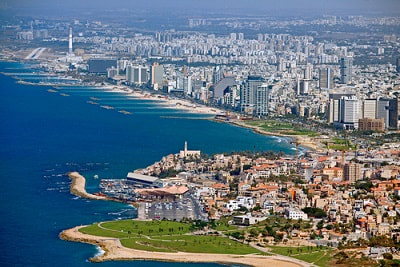 Over 100,000 Americans live in Tel Aviv, making it among the most popular US expat destinations in the world. It’s appeal is easy to see: it’s a thriving, hi-energy, hi-tech city with all the natural, cultural, religious and historical wonders of the rest of Israel on its doorstep. One issue for US expats living in Tel Aviv though is that they have to file both US taxes as a US citizen, and Israeli taxes as a Israeli resident, in both cases reporting their worldwide income.

Thankfully, in fact, filing two tax returns isn’t necessarily as complicated as many American expats living in Tel Aviv first fear, and most end up not owing the IRS anything, although they still have to file.

Not every American living in Tel Aviv has to file an Israeli tax return. If your salary income has already had Israeli income income tax deducted at source, or if you’ve already paid tax on your rental or foreign income, and if your total income doesn’t exceed certain thresholds, then you don’t have to file. We strongly recommend that Americans living in Tel Aviv consult a trustworthy local accountant to check whether they need to file an Israeli tax return or not.

For those who do have to file, Israeli returns are due by April 30th if filed offline, or May 31st if filed online.

US expats have until June 15th to file, with a further extension available until October 15th. Any tax due must still be paid by April 15th though.

Furthermore, while it’s always obligatory to file, there are several exclusions that you can apply for that reduce most expats’ US tax liability to zero.

Many expats living and working in Tel Aviv find that they pay more Israeli income tax than the US tax they owe. In this scenario, it’s usually more beneficial to claim the Foreign Tax Credit.

“In some countries, including the US, virtually everyone has to file an annual tax return. In Israel, to make things easier for some, not everybody has to do so.”
– The Jerusalem Post

The Foreign Tax Credit offers US expats a $1 tax credit for every dollar equivalent of tax that they’ve paid abroad. For expats in Tel Aviv paying more Israeli tax than they owe to the IRS, this means that they can claim more US tax credits than they owe, eradicating their US tax liability while giving them excess tax credits that they can carry forward and which may come in handy in the future. The Foreign Tax Credit can be claimed by filing form 1116.

For US expats earning under around $100,000 and paying less Israeli tax than their US tax due, the Foreign Earned Income Exclusion could be a better option.

The Foreign Earned Income Exclusion lets expats who can prove that they are either a permanent resident in Israel or that they spend at least 330 days outside the US in the year exclude the first around $100,000 of their income from US taxes.

Further US filing requirements for expats in Tel Aviv

As well as filing a federal tax return, US expats in Tel Aviv who have over $10,000 in total held in foreign bank or investment accounts at any time during the tax year are required to file an FBAR (Foreign Bank Account Report). In practice this means filing FinCEN form 114 online before October 15th.

Because FBARs are filed to FinCEN rather than to the IRS, the penalties for neglecting to file are much steeper, so it’s important requirement to fulfill, especially considering almost all foreign banks and investment firms now provide the IRS with information about their US account holders directly.

Expats living in Tel Aviv with non-tangible foreign assets (so not including property, cars, art or jewelry) worth over $200,000 at any time during the tax year also have to report them by filing form 8938 with their federal return.

If you’ve been living in Tel Aviv for a while but you didn’t know that you had to file US taxes, there’s an IRS amnesty program that lets you catch up on your US filing without facing any penalties.

The Streamlined Procedure is a great opportunity for expats living in Tel Aviv to become US tax compliant before the IRS comes to them.