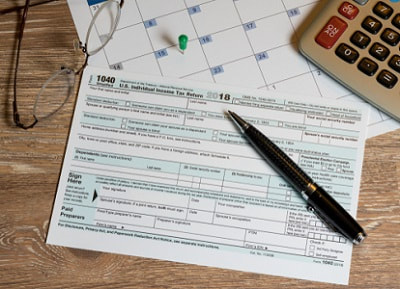 Living abroad is the opportunity of a lifetime, however it can be slightly marred for American expats because they are required to continue filing a US tax return from overseas, reporting their worldwide income.   Expats filing in 2019 however will find that form 1040 is new, for the first time in decades.

One of Trump’s core campaign pledges when running for president was to reduce tax rates, but also to simplify tax filing. New form 1040 is the result of this pledge.

The first difference that expats will notice is that form 1040 is smaller – postcard sized in fact.

This immediately begs the question of where all the other fields from the old form 1040 have gone, and the answer is that they’ve been moved to a new series of schedules.

Whether new form 1040 will make filing easier entirely depends on each expat’s circumstances, so those with the most straightforward circumstances should find form 1040 easier to fill in, while those with more complex situations will have to familiarize themselves with the new schedules.

For most expats, form 1040 was never the issue though, as what makes filing complex for expats is having to file the additional forms just for Americans living abroad, such as form 2555 to claim the Foreign Earned Income Exclusion, form 1116 to claim the Foreign Tax Credit, FinCEN form 114 (the so-called Foreign Bank Account Report, or FBAR) to report their foreign bank and investment accounts, and form 5471 to report foreign registered businesses.

So while the changes to form 1040 will make life a little easier for some expats, they will also make it more complex for others, and in any case expats still have to negotiate the same additional forms as always.

The front of the new form has fields for name, address, social security number, filing status, and dependants.

“If your tax situation has any degree of complexity, preparing your 2018 return won’t be any easier than before; it will be different.”
– Marketwatch

The rear meanwhile has fields to report income, deductions (although few expats will need to claim deductions this year, due to the increase in the standard deduction), taxes, and credits.

Then there are the six new schedules:

– New Schedule 1 is for reporting additional income such as capital gains, alimony, and gambling winnings.- New Schedule 2 is for the Alternative Minimum Tax (AMT).

– New Schedule 3 is for people claiming non-refundable tax credits (other than the Child Tax Credit).

– New Schedule 4 is for people who owe other taxes, such as the additional 0.9% Medicare tax for higher earners.

The old schedules A through H, plus SE, EIC and 8812 are still being used too, so with a total of sixteen schedules, it’s certainly debatable whether the new form 1040 has in fact simplified filing in 2019 for a majority of expats.

Expats who didn’t file last year can simply back file year 2017 when they file their 2018 return, unless they have previous years to catch up on too.

Expats who have missed more previous years because they weren’t aware of the requirement to file US taxes from abroad can catch up while claiming the exemptions available for expats and without facing penalties under an IRS amnesty program called the Streamlined Procedure, so long as they do so before the IRS contacts them about it.