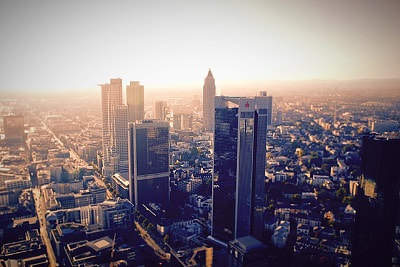 Thanks to Germany’s consistently strong economy, Frankfurt is one of the most popular European cities for US expats, with tens of thousands Americans living there.

Frankfurt is a great place to live. Its culture and nightlife, cuisine, high-quality public services, and great access to the rest of Germany (and indeed the rest of Europe) together guarantee American expats in Frankfurt an amazing experience.

The only downside is that US expats in Frankfurt are required to file both US taxes as a US citizen, and German taxes as a German resident.

Filing both tax returns needn’t be as complicated as many American expats living in Frankfurt at first think however. Most in fact end up not owing the IRS anything, although they still have to file.

For expats whose only income is from employment in Germany, German income tax is deducted at source and there’s no need to file a German tax return. That said, for many people it’s still worth filing a German tax return, as by claiming one or more of the available allowances expats can often claim a refund.

The German tax year is the same as the US, Jan 1st to December 31st. German tax returns are due by May 31st however if you file yourself, or by December 31st if you use an accountant.

German federal income tax rates range from 0% to 45%. There is also a solidarity tax applied as a percentage of German income tax owed, of up to 5.5%.

US taxes for expats living in Frankfurt

“Expats moving to Frankfurt will find themselves in a confident, global city that effortlessly combines its role as a leading modern business centre with a charming cultural character.”
– Expat Arrivals

For expats living and working in Frankfurt who pay more in German income tax than the US tax they owe, it’s often most beneficial to claim the Foreign Tax Credit.

The Foreign Tax Credit gives US expats a $1 tax credit for every US dollar equivalent of tax that they’ve paid abroad. For expats in Frankfurt paying more German tax than they owe to the IRS, this means that they can claim more US tax credits than the US tax that they owe, eradicating their US tax liability while giving them excess US tax credits that they can use in the future. Expats can claim the Foreign Tax Credit by filing form 1116.

For US expats earning less than around $100,000 and paying less German tax than the US tax due, the Foreign Earned Income Exclusion is often a better option.

The Foreign Earned Income Exclusion lets expats who can prove that they are either permanently resident in Germany, or that they spent at least 330 days outside the US in the tax year, exclude the first around $100,000 of their income from US taxes.

Further US filing requirements for expats in Frankfurt

As well as filing a federal tax return, US expats in Frankfurt who have more than $10,000 in total in foreign bank or investment accounts at any time during the tax year are required to file an FBAR (Foreign Bank Account Report). In practice, filing an FBAR means filing FinCEN form 114 online before October 15th.

Expats living in Frankfurt with financial foreign assets (but not tangible physical assets such as property, or cars for example) worth over $200,000 at any time during the tax year are also required to report them by filing FATCA (The Foreign Asset Tax Compliance Act) form 8938 with their federal return.

Expats who have been living in Frankfurt for a while but who didn’t know that they have to file US taxes can catch up with their US tax filing using an IRS amnesty program that means they won’t face any penalties.

The Streamlined Procedure is a great opportunity for expats living in Frankfurt who are behind with their US tax filing to become fully compliant before the IRS writes to them, at which point they will be liable to pay back taxes and fines.