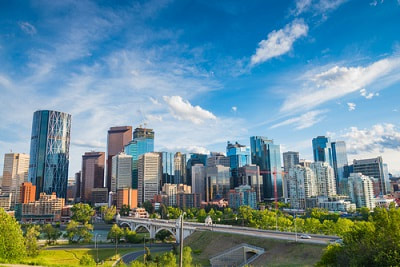 There are an estimated 700,000 Americans living in Canada.

Canada is the number 1 destination for Americans living abroad. If you’re an American expatriate living in Canada though, what exactly do you need to know about filing US expat (and Canadian) taxes?

All US citizens and green card holders are required to file a US federal tax return and pay taxes to the IRS, regardless of where in the world they live or where their income is generated. The good news is that there are IRS provisions that you can claim to mitigate double taxation.

If your annual income exceeds US$12,550 (per individual) in 2021 ($12,400 in 2020), or $400 of self-employment income, or just $5 of any income if you are married to but filing separrately from a foreigner, then you are required to file Form 1040. While any tax owed is still due on April 15, expats get an automatic filing extension up until June 15. This can be extended further until October 15 upon request.

If you have have financial assets registered outside the US worth over US$200,000 per person, you also need to file Form 8938 to declare them.

If you have over US$10,000 in total in foreign financial accounts, including all bank and investment accounts, at any time during the tax year, you must also file FinCEN form 114, better known as an FBAR (Foreign Bank Account Report).

“A 2013 survey commissioned by Thomson Reuters asked 1,009 Canadians if they liked filing their taxes. 41 per cent said yes.”
– CBC News

There are several ways that Americans living in Canada can reduce their US tax bill, most often to zero. The two primary ones are the Foreign Earned Income Exclusion, which allows you to exclude the first around US$110,000 from US income tax if you can demonstrate that you are resident in Canada, and the Foreign Tax Credit, which gives you a US dollar tax credit for the equivalent value of tax that you’ve already paid in Canada.

The Foreign Tax Credit is typically a better option if you pay more income tax in Canada than the US tax you would owe, as you can carry the excess US tax credits forward for future use.

Both of these IRS provisions must be claimed by filing the relevant form though, so if your global income exceeds the minimum IRS thresholds mentioned above, you still have to file a US tax return.

The US – Canada Tax Treaty

The United States – Canada Tax Treaty covers double taxation with regards to income tax and capital gains tax, however, due to a Savings Clause, the benefit is limited for Americans expats in Canada.

The solution for US expats to avoid double taxation on their income arising in Canada is to claim US tax credits to the same value as Canadian incometaxes that they’ve already paid.

For income arising in the US, Americans in Canada can claim Canadian tax credits against income US taxes paid to the IRS.

To claim US tax credits against Canadian taxes paid, expats must file form 1116 when they file their federal tax return. By doing this, the vast majority of US expats in Canada won’t end up owing any US income tax.

The US-Canada Tax Treaty also has a clause that allows the Canadian government to send US expats’ Canadian tax information directly to the IRS, as well as their Canadian bank and investment account balances.

Furthermore, the Canadian government can collect fines on behalf of the IRS, and penalties for not filing US  federal returns and in particular FBARs can be steep.

To claim a provision in the United States – Canada Tax Treaty (other than claiming US tax credits), expats should use IRS form 8833.

American expats in Canada should also be aware that many of the tax free investment instruments available in Canada are taxable under U.S. law, including Registered Retirement Savings Plans, Tax Free Savings Accounts, and Canadian-based mutual funds.

Furthermore, the IRS doesn’t fully exempt capital gains on the sale of a primary residence. As such, US expats in Canada should always consult with a US expat tax specialist to ensure that they understand the implications of buying or selling their home or Canadian investments.

A separate agreement called a Totalization Agreement helps US expats in Canada not to pay social security taxes to both the US and Canada governments. Expats’ contributions made while in Canada can be credited to either system. Which country they pay to depends on how long they will be living in Canada for.

Canadian taxes – what you need to know

Tax Day in Canada is April 30, and this is also the date you have to file by, other than if you are self-employed, in which case you must file by June 15. The Canadian equivalent of the IRS is called the CRA (Canada Revenue Agency), and the personal income tax declaration form is called T1 General, or just T1.

Canadian income tax rates. range from 15% to 33%. Americans are normally considered residents in Canada for tax purposes if they maintain a home in Canada, however other factors may be taken into account, such as maintaining bank accounts, club and other memberships, business ties, and location of spouse and dependents.

We recommend that if you have any doubts or questions about your tax filing situation as an American living in Canada, that you contact an expat tax specialist.