What Does the Final Trump Tax Reform Bill Mean for Expats? 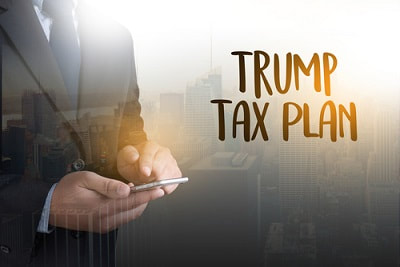 Donald Trump ran for president on a promise to reduce tax rates and simplify the tax code. Now that the final tax reform bill has been signed into law, we can assess whether he has achieved his aims, as well as the impact of the changes for Americans living abroad.

Very generally speaking, many expats won’t see very much difference under then new rules, if they currently aren’t paying US taxes…

..thanks to claiming one or more of the exemptions available to expats when they file. As always though, it will depend on each expat’s specific circumstances.

Trump wanted to reduce not only tax rates, but also simplify the income tax system by reducing the number of tax brackets from the current 7 to 3 or 4. In the final bill however, the 7 tax brackets remain, although all but 2 now have lower tax rates.

The situation is slightly complicated though by the fact that some of the new tax brackets have lower thresholds, so that it actually depends on a taxpayer’s exact income as to whether they’ll pay more or less income tax under the new system. It is estimated though that 80% of Americans will pay less though.

Few expats actually pay US taxes though, as when they file they claim one or more of the expat exemptions that allow them not to. Expats who earn less than around $100,000 and claim the Foreign Earned Income Exclusion will be unaffected by the changes, for example. Expats who pay taxes abroad at a higher rate than US tax rates and who claim the Foreign Tax Credit will again see little difference, other than perhaps having more excess US tax credits that they can carry forward each year.

“The GOP contends that the more than $1.4 trillion in tax cuts contained in the bill will spark business investment, hiring and wage growth.” – CNBC

Again though many expats won’t feel the benefit of the change, as they claim the exemptions available for expats anyway.

Expats with children will see a benefit from the increase in the Child Tax Credit, which will double from $1,000 to $2,000 per child, with $1,400 per child available as a refund, even if no US tax is owed.

Possibly the most successful of Trump’s early ambitions for tax reform was to dramatically reduce the corporation tax rate, to attract inward investment and allow companies to re-invest more of their profits into hiring and growing.

While the final corporation tax rate will be 21% rather than the original target of 15%, it is still a massive drop from the current 35%, and expats with American corporations will see an immediate increase in their profit once the new rules take affect.

Trump vowed to abolish the Estate Tax when campaigning, calling it a ‘death tax’, however the final compromise was to double the basic exclusion, from $5.6m per person, to $11.2m.

Expats with assets over $5.6m will benefit from the change, and may be able to simplify their estate planning strategy accordingly.

Some expat groups campaigned for expats not to have to file or file US taxes at all, either by repealing the 2010 Foreign Account Tax Compliance Act, which by compelling foreign banks to report their American account holder details to the IRS allows the IRS to enforce expat tax compliance, or by switching from the current Citizenship Based Taxation system, which means all Americans have to file, wherever in the world they live, to a Residence Based system in line with other countries, meaning only US residents would have to file US taxes.

Ultimately though, to avoid lengthy delays or even defeat, the final bill just focused on the flagship issues of lowering corporate and income tax rates, leaving many other ‘wishlist’ reform ideas omitted.

The new changes, while now law, don’t apply to the 2017 tax year, so that they won’t affect filing until 2019 (for the 2018 tax year). There may be steps worth taking in 2018 to reduce future tax liability though, depending on each expat’s circumstances. Your Bright!Tax expat expert CPA will be happy to provide you with advice regarding these.

Also, expats who are behind with their US tax filing and who were waiting in case the new law meant they wouldn’t be required to file can still take advantage of the IRS Streamlined Procedure amnesty program that allows them to catch up without facing any penalties, provided that they do so before the IRS comes to them.