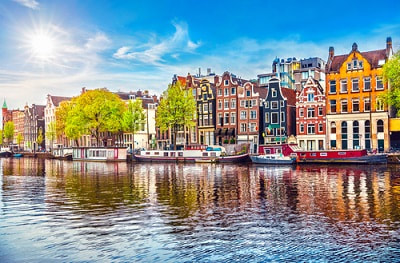 There are an estimated 35,000 Americans living in the Netherlands.

The Netherlands is an exhilarating destination for Americans living abroad. A small country with a unique and proud history, the Netherlands today is characterized by modern, tolerant values, a positive outlook, and an abundance of bicycles! Abd, as an added bonus, almost everyone speaks great English. As an American expatriate living in the Netherlands though, what exactly do you need to know regarding filing US expat (and Dutch) taxes?

While Dutch income taxes are relatively high, the good news is if you are paying income tax in the Netherlands, there are various exclusions and exemptions available to prevent you having to pay tax on the same income to the IRS too.

There are several ways that Americans living in the Netherlands can reduce their US tax bill, normally to zero.

“The Netherlands taxes its residents on their worldwide income; non-residents are subject to tax only on income derived from specific sources in the Netherlands.”
– PricewaterhouseCoopers

The two primary ones are the Foreign Earned Income Exclusion, which allows you to exclude the first around US$110,000 of foreign earned income from US tax, and the Foreign Tax Credit, which gives you a dollar tax credit for every dollar of tax you’ve already paid in the Netherlands. The Foreign Tax Credit is typically a better option if you pay more tax in the Netherlands than you would to the IRS, as you can carry the excess credits forward for future use. Note that both of these provisions must always be actively claimed by filing the corresponding IRS forms with your US federal tax return.

The United States – Netherlands Tax Treaty covers double taxation with regards to income tax and capital gains tax, however, as already mentioned, due to a Savings Clause, the benefits are limited for Americans expats living in the Netherlands. The treaty does ensure though that no one will pay more tax than the higher of the two countries’ tax rates, and it also defines where taxes should be paid, which normally depends on where the income arises.

The way the treaty allows US expats to avoid double taxation on their income taxed in the Netherlands is by allowing them to claim US tax credits when they file their US tax return to the same value as Dutch income taxes that they’ve already paid.

For income arising in the US, Americans in the Netherlands can claim Dutch tax credits against income US taxes paid to the IRS.

To claim US tax credits against Dutch taxes paid, expats must file form 1116 when they file their federal tax return. By doing this, the vast majority of US expats in the Netherlands won’t end up owing any US income tax.

The US – Netherlands Tax Treaty also allows the Dutch government to send US expats’ Dutch tax information directly to the IRS, as well as their Dutch bank and investment account details and balances.

Dutch taxes – what you need to know

The Dutch tax authority is called Belastingdienst. If your only source of income is employment in the Netherlands, you don’t need to file a return. Otherwise, Tax returns should be filed by May 1.

We strongly recommend that if you have any doubts or questions about your tax filing situation as a US expat living in the Netherlands, you contact an expat tax specialist.