An American Expat Guide to Voting from Abroad in 2020 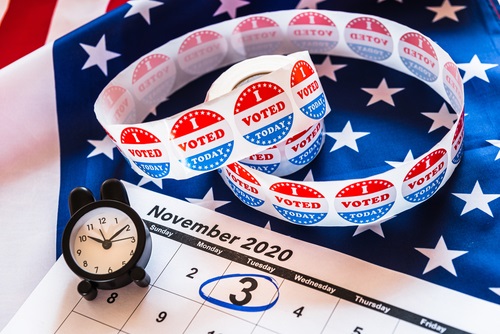 Election year! The US presidential election taking place on November 3rd 2020 may be the strangest election in living memory, happening against a backdrop of domestic social unrest and a global pandemic.

Can Americans living abroad vote in US elections?

All Americans over the age of 18 have the right to vote in US elections, including Americans living abroad. In common with Americans in the States, American expats first have to register to vote though.

Do expats’ votes matter? Although traditionally relatively few expats vote, perhaps feeling that they’re less affected by who wins, expat votes in fact can make a real difference. In 2016, six states were decided by less than 50,000 votes, while in 2000, a handful of votes swung the election, so the 9 million Americans who live abroad can certainly make a difference, especially when it’s a tight race, as it’s expected to be in 2020.

Furthermore, who wins and loses definitely does affect expats: very generally speaking, the Democrats’ foreign policy is more likely to be friendlier and more collaborative with the countries where expats live, while the Republicans are more likely to reduce the US tax filing burden for expats.

In which state do American expats vote?

“U.S. citizens can receive an absentee ballot by email, fax, or internet download, depending on the state they are eligible to vote in.” – the State Department

While votes from American expats are known as absentee votes, expats actually vote in the state where they last lived, using their last residential address there. No mail will be sent to the address, and registering or voting in federal elections doesn’t trigger any state tax liability (in some states, voting in state or local elections can however).

How do US expats register to vote?

It’s easy for expats to register to vote. To register, simply go to the Federal Voting Assistance Program website, click on ‘Request your ballot now’, and follow the instructions.

Depending on the state, you’ll then receive a ballot electronically.

Expats who are registered in the remaining nineteen states must print, fill in, and mail their ballot to the relevant state election office. They can also mail or deliver it to your local embassy or consulate, leaving time for them to mail it to the US.

Children of Americans who were born abroad can register at their parents’ last US residential address.

It’s important to register before the state deadline.

Is the IRS more likely to audit American expats who register to vote?

Given that expat votes can make a real difference, and that the outcome affects expats too, it’s surprising that so few expats have registered to vote in previous presidential elections (just 208,000 ballots were received from Americans abroad in 2016, for example, and there are an estimated 9 million Americans living abroad).

Aside from the logistics (and now it’s easier to vote electronically in many states), and general apathy, another main reason why expats often don’t vote though is that they are concerned that registering to vote will result in either IRS scrutiny or additional tax implications.

While all American citizens (as well as anyone with the right to American citizenship) are required by law to file US taxes, reporting their global income, registering to vote in a US federal election will not trigger any IRS scrutiny or new tax liability.

Expats who are behind with their US tax filing from abroad can normally catch up without facing penalties or paying US taxes under an IRS amnesty program, should they need to, and so long as they do so as soon as possible after they realize that they should be filing from abroad.