I Was A Fiscal Cliff Weakling 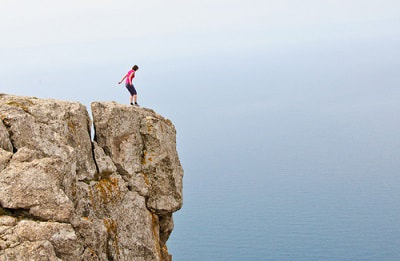 I worry sometimes. Sometimes a lot. I’ve been living in and outside the States for some years and one time as I was leaving, back in 2010, I knew for sure that upon looking back at my beloved country – our United States of America, within a short period (I don’t know, months?) I’d be witness to the buckling and ultimate collapse of the American behemoth. The leviathan that America had become was groaning under the stress of its own unsupportable fiscal weight and was about to give way …

I fully expected to be watching, in awed disbelief, as the United States succumbed to greater financial forces and had to face a fiscal reckoning of its own making. I’ve always been fascinated by finance and economics (for me, it was finance instead of sports) and as the last couple years have unfolded, astonishingly, not only did the United States not collapse, I happened upon a whole new way of looking at economies and how macro-fiscal matters really unfold.

I used to believe economics was science – borne of great minds, like Keynes, Hayek, von Mises. Through quantification, calculation and forward analysis, though from different economic schools of thought, they predicted probable outcomes based on their own particular certainties. Using historical modeling as reference and for proof to support their forward projections, they captured the imagination of a larger population of thinkers. Given their disparate philosophies of how economies work great debates ensued and they continue to this day. Each side, right vs. left, continually outdoes the other with proofs and ‘precise outcomes’ that favor their worldview as events unfold.

“Show Me the Fiscal Cliff”

I’ve reached a new conclusion though. Economics is more political and social than it is reliant upon numbers and hard math. The math is the final arbiter. It brings us to the end of the story, but the real intrigue, the part that matters, because it is what we live, is the drama that is played out before economies and civilizations rise and fall. It is always a story that is long and deep and nuanced and highly unpredictable.

The math of economics assumes rational, predictive behavior. However, the social aspect of economics mandates that, even if governments act in the greater interest, there are both winners and losers. In the United States, our social construct and our democracy relies upon the consent of the governed. Those who are governed must participate in our democracy, by voting, in order for it to ‘work’. As long as we the governed are in agreement that we are active in a participatory democracy, then we support events and outcomes as they unfold. After all, we have been ‘instrumental’ in bringing these things about.

The answer to the fiscal problems the United States faces, in reality, are insurmountable. They cannot be solved. The math says so. The amount of debt the United States has accrued and the monetary steps necessary to remedy that are impossible to implement to any meaningful degree. It’s a complicated problem of unfathomable proportions that is politically inexpedient and, therefore, virtually impossible to address. The average American cannot get his head around, much less embrace, the necessary reduction in entitlements and increase in taxes that would be necessary to actually fix our upside down American economy.

The so called ‘answer’ to this quandary has emerged and has captured the imagination, not just of the U.S., but of the world. It is a manifestation of political and social theater that is brilliant in its inception – and masterful in its execution. The answer is the Fiscal Cliff. The sound of the words themselves are ominous enough to give one pause. ‘Fiscal Cliff’ has the ring of impending doom. They are words that both terrify – and unify those who hear it. Upon hearing such words, most Americans would be ready and willing to marshal whatever resources are necessary to avert this looming catastrophe.

So Americans rallied. They participated in presidential elections and chose a person whom they believed had the right stuff and the wherewithal to master the beast. They chose a man who could reach forward and grasp us just as we were at the precipice and with calm and determination pull us back to safer ground. We are safe now. We did not go over the cliff. Disaster has been averted. We, as Americans, pulled together and by exercising our democratic rights we solved the crisis. We prevailed. Our mood as a society is better now. Now we can move forward with more confidence that we’ve faced the crisis and did what it took to ‘solve it’.

It’s not really solved though. It’s not even close to being solved. All that was gained by the ‘grand bargain’ that was struck between the opposing parties regarding the Fiscal Cliff is a minimal tax increase that makes no appreciable dent in our debt outstanding and a ‘promise’ to address spending cuts a few months hence. My expectation is that these cuts, like most other promised cuts, will never actually materialize. They never seem to. The actual agreement results in deficits that are 4 trillion dollars higher than they are now. Some cut. Some Fiscal Cliff. Did we address the reality of our situation? No. But the theater? Superb.

Our immediate reality is clear then: There is no politically palatable way for the United States to fix what ails us. The fiscal imbroglio that engulfs us is bad – unimaginably bad, but there is no realistic way forward that will actually fix it. Politicians themselves know this and are primarily focused on the next best thing and that is to keep the music playing. Louis XV was attributed with saying, “Après moi, le déluge” (“After me, the deluge”), suggesting his only concern was for his life and his lifetime. Today in the States, the governing class focuses on the present and in the present the participation of the governed is essential lest the music stops. Should the music stop, order breaks down and mayhem ensues (in the case of France, after Louis XV, it was the French Revolution).

It’s not the sort of picture anyone wishes to visualize. And so, looking at our reality through a more tinted lens now, as I ponder our fiscal plight I don’t worry so much anymore. What I once worried about was the end game. What I’ve learned is that the end game, though certain, is impossible to predict. In the meantime, I’ll be enjoying and listening as the music plays – “More fiscal cliff please”.