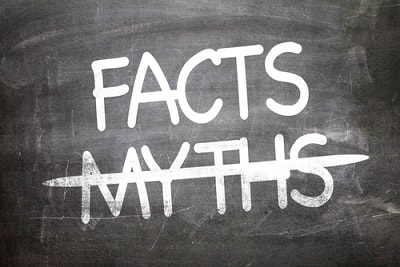 Most US expats are aware that the IRS is interested in Americans living abroad, and many have heard whispers about FATCA and FBAR, however millions are still unsure about their legal obligations.

Worse still, rather like the person at the end in a game of Chinese whispers, many have heard incorrect information via word of mouth and so may be at risk of penalties for not doing things they didn’t know they had to do.

So here is our myth-busting guide to the truth about US taxes and filing for expats.

FACT: The US is the only major nation on the world that taxes on citizenship rather than residence, so wherever you live you need to file tax with the IRS on your worldwide income. That said, if you are already paying income tax in your country of residence, the IRS has several exemptions in place so that you don’t pay tax twice on the same income. But, if you earn over $10,000 (in any currency), or just $400 if you’re self employed, you still have to file a US federal return every year.

FACT– The US taxes on worldwide income, so even if you are earning abroad and claiming an exemption such as the Foreign Tax Credit or Foreign Earned Income Exclusion so that you don’t have to pay US tax on it, you still have to declare all of your foreign earned income on your US federal return.

FACT – You have to declare all of your worldwide income on your return. To claim the Foreign Earned Income Exclusion you need to attach form 2555 to your form 1040.

FACT – Wherever you live, if you earn over the minimum thresholds (see myth 1, above), you have to file a federal return. If you want to take advantage of the provisions set out in a tax treaty, you may have to attach form 8833, ‘Treaty-Based Return Position Disclosure Under Section 6114 or 7701(b)’, to your form 1040.

FACT – Sadly this isn’t the case. The IRS shares tax info with foreign governments, so it can find out what you are earning from the government of the country where you live. Also, the FATCA (Foreign Account Tax Compliance Act) law obliges foreign banks to hand over account details of their US account holders. This means that if you have a bank account, the IRS knows about it, as well as your home address. If you’re not filing, they’ll be in touch at some point.

There are an astonishing 185 thousand banks and financial institutions, individually, and over 110 countries, at the sovereign level, that are now reporting your personal, local financial account details to the IRS.

This one may in fact be true, however it depends on which State you lived in before you moved abroad, whether you still have income originating in the State (such as from a let property), and whether you intend to return to live in the same State in the future. Whereas most States will only continue to tax you if you don’t let them know that you are moving abroad permanently (and seven – Wyoming, Washington, Texas, South Dakota, Nevada, Florida and Alaska – don’t tax residents at all), four – New Mexico, Virginia, South Carolina and California – insist you prove that you will never be returning to release you from your State tax obligations.

Myth 7 – My foreign savings, investments, and assets are my own business, not the IRS’.

Again, sadly not. If you have a total of at least $10,000 either in one or spread out between multiple foreign financial accounts, including checking, savings, investment, pension, and mutual fund accounts, you are required to file FinCEN form 114, also know as a Foreign Bank Account Report, or FBAR.

Myth 8 – I’ve been living abroad but didn’t know I had to file, but I can’t start now or I might face penalties for not filing before now.

Good news at last! In 2014 the IRS relaunched the Streamlined Procedure to allow expats who weren’t aware that they had to file to begin to do so without paying any penalties. You simply have to file the last three years’ returns and the last six years’ FBARs and pay any taxes (if any are due).

Most US expats don’t end up having to pay US taxes, thanks to IRS exemptions, however almost all Americans living abroad to have to file a federal return each year declaring their worldwide income and including any additional forms to elect the exemptions they would like to claim.

If you have any questions regarding your tax situation, don’t hesitate to get in touch for some advice.