Comment: Record Numbers of Americans are Renouncing US Citizenship. Again. 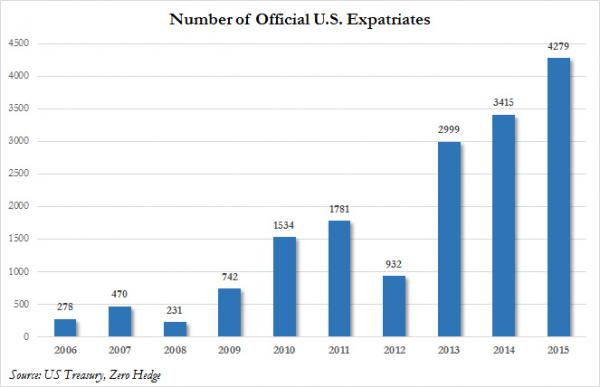 Forbes, CNN, and The Washington Times were among press outlets recently reporting that record numbers of Americans renounced their US citizenship in 2015.

The figures have been increasing exponentially since 2010. Prior to then, the total amount of annual renunciations was typically in the low hundreds. In 2008 for example, there were just 235, which puts 2015’s 4279 into stark perspective, with a more than 1800% increase.

The graphic below gives a clear impression of the rate of increase.

Consider also that the fee to renounce jumped from $450 to $2350 in 2013, as the State Department tried to deter people from renouncing, presumably out of shame.

The first two questions that arise thinking about the astonishing increase in renunciations are who are the people renouncing, and why are they doing so.

The majority of them are normal, everyday folks who have settled permanently abroad, and they are renouncing their American citizenship reluctantly but feel pressed to do so because the US is the only major country in the world that taxes citizens on their worldwide income regardless of where they live and where their income was earned. While this has always been the case, before the financial crisis of 2008/9/10, the US mostly took a laissez faire attitude towards enforcing tax compliance from Americans living abroad.

“Many of those severing links are Americans living overseas who are tired of dealing with complicated tax paperwork, a headache that has worsened since new regulations came into effect.” – CNN Money

In 2010 however, the Foreign Asset Tax Compliance Act (FATCA) came into force, with the aim of preventing wealthy individuals and corporations from avoiding tax by concealing earnings abroad. However, the law does not distinguish between super-rich individuals and multinational corporations on one hand, and the 9 million or so ordinary Americans pursuing normal middle class lives abroad on the other. FATCA was preceded by FBAR (the Foreign Bank Account Report), requiring Americans with bank accounts abroad to report them to the IRS. On the books since the US Civil War, FBAR had always been around but was never vigorously enforced.

Both FATCA and FBAR have caused enormous stress, because of the way they’ve been enacted and enforced more than because of what they set out to achieve.

The penalties for non-compliance are huge, the filing requirements are onerous, and the information insisted upon is arguably overly intrusive. Furthermore, the IRS has required foreign banks to report account information about American account holders, causing many foreign banks to have preferred to refuse Americans accounts rather than dedicate resources to fulfilling IRS requirements.

“Foreign banks are sufficiently worried about keeping the IRS happy that many simply do not want American account holders.”
– Forbes

In this context, for Americans who have settled abroad permanently, it begins to make sense to consider renouncing their US citizenship rather than live as a victim to the heavy-handed IRS, potentially having a bank account closed or being unable to open one, being refused a loan or mortgage, dealing with multiple filing requirements each year or risking prosecution for not doing so, or paying capital gains tax to the US on a home sold abroad perhaps. An American selling a house in the UK for example would be liable to pay capital gains tax to the IRS but not to the UK government assuming the house is their primary residence. As this may cost them upwards of tens of thousands of dollars, the cost of renouncing citizenship begins to look like a great deal.

There is something ethically risible though about a tax system that aggressively pursues, burdens and penalizes its own citizens because they happen to live abroad. Citizenship is supposed to offer protection, not persecution. Expats represent an estimated 2-3% of US citizens, a small but not irrelevant minority. Because they are so geographically dispersed though, it is hard for them to collectively group together and represent themselves, making them an easy, seemingly powerless target for a federal government struggling to deal with the hangover of the financial crisis.

We still believe though that renouncing US citizenship is a drastic move, and should only be considered as a very last resort. In most cases, the cost and burden of filing isn’t as dire as many people fear, even when there’s a backlog, while renouncing is a permanent move that cannot be reversed.