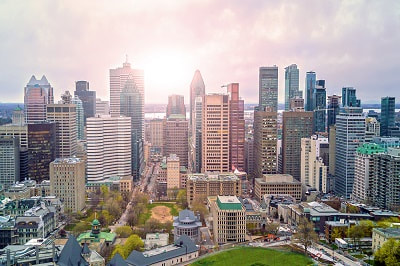 Montreal is the fifth most popular destination in the world for US expats, with an estimated 45,000 Americans living in the city.

It’s easy to understand why. Montreal is a great place to live. Its culture and nightlife, infrastructure, cuisine, international mindset, and the high-quality free public services all serve to entice more Americans here than all but four other cities in the world.

Unfortunately for Americans living in Montreal though, US expats in Montreal are required to file both US taxes as a US citizen, and Canadian taxes as a Canadian resident.

Filing both tax returns needn’t be as complicated as many American expats living in Montreal at first think however. Most in fact end up not owing the IRS anything (although they still have to file).

For expats whose only income is from employment in Canada, Canadian income tax is deducted at source and there’s no need to file a Canadian tax return.

The Canadian tax year is the same as in the US, Jan 1st to December 31st. For those who do have to file a Canadian tax return, Canadian returns are due by April 30th. Married couples must file Canadian taxes separately.

Canadian tax returns are filed to the Canadian equivalent of the IRS, the CRA (Canada Revenue Agency).

Canadian federal income tax rates range from 0% to 33%. There is also a provincial income tax that varies from province to province.

If expats living and working in Montreal pay more in Canadian income tax than the US tax they owe, it’s often more beneficial for them to claim the Foreign Tax Credit.

“Under Foreign Bank and Financial Assets Report obligations, Americans in Canada now have to submit a list of all of their bank accounts, brokerage accounts, company pension plans and some profit-sharing plans.”
– the Globe and Mail

The Foreign Tax Credit offers US expats a $1 tax credit for every US dollar equivalent of tax that they’ve paid abroad. For expats in Montreal paying more Canadian tax than they owe to the IRS, this means that they can claim more US tax credits than the US tax that they owe, eradicating their US tax liability while giving them excess US tax credits that may come in handy in the future. Expats can claim the Foreign Tax Credit by filing form 1116.

For US expats earning under around $100,000 and paying less Canadian tax than the US tax due, the Foreign Earned Income Exclusion is often a better option.

Further US filing requirements for expats in Montreal

As well as filing a federal tax return, US expats in Montreal who have more than $10,000 in total in foreign bank or investment accounts at any time during the tax year are required to file an FBAR (Foreign Bank Account Report). Filing an FBAR means filing FinCEN form 114 online before October 15th.

Expats living in Montreal with financial foreign assets (but not tangible physical assets such as property, or cars for example) worth over $200,000 at any time during the tax year are required to report them by filing FATCA (The Foreign Asset Tax Compliance Act) form 8938 with their federal return.

Expats who have been living in Montreal for a while but who didn’t know that they have to file US taxes can catch up by employing an IRS amnesty program that means they won’t face any penalties.

The amnesty program is called the Streamlined Procedure, and to qualify you have to file your last 3 tax returns, your last 6 FBARS (if required), pay any back taxes that you owe (often none, once you’ve claimed the most beneficial exclusions given your circumstances), and self-certify that your previous failure to file was non-willful.

The Streamlined Procedure is a great opportunity for expats living in Montreal who are behind with their US tax filing to become compliant before the IRS writes to them.